I gathered some Dollar Tree treasures to make our holiday centerpiece ~ 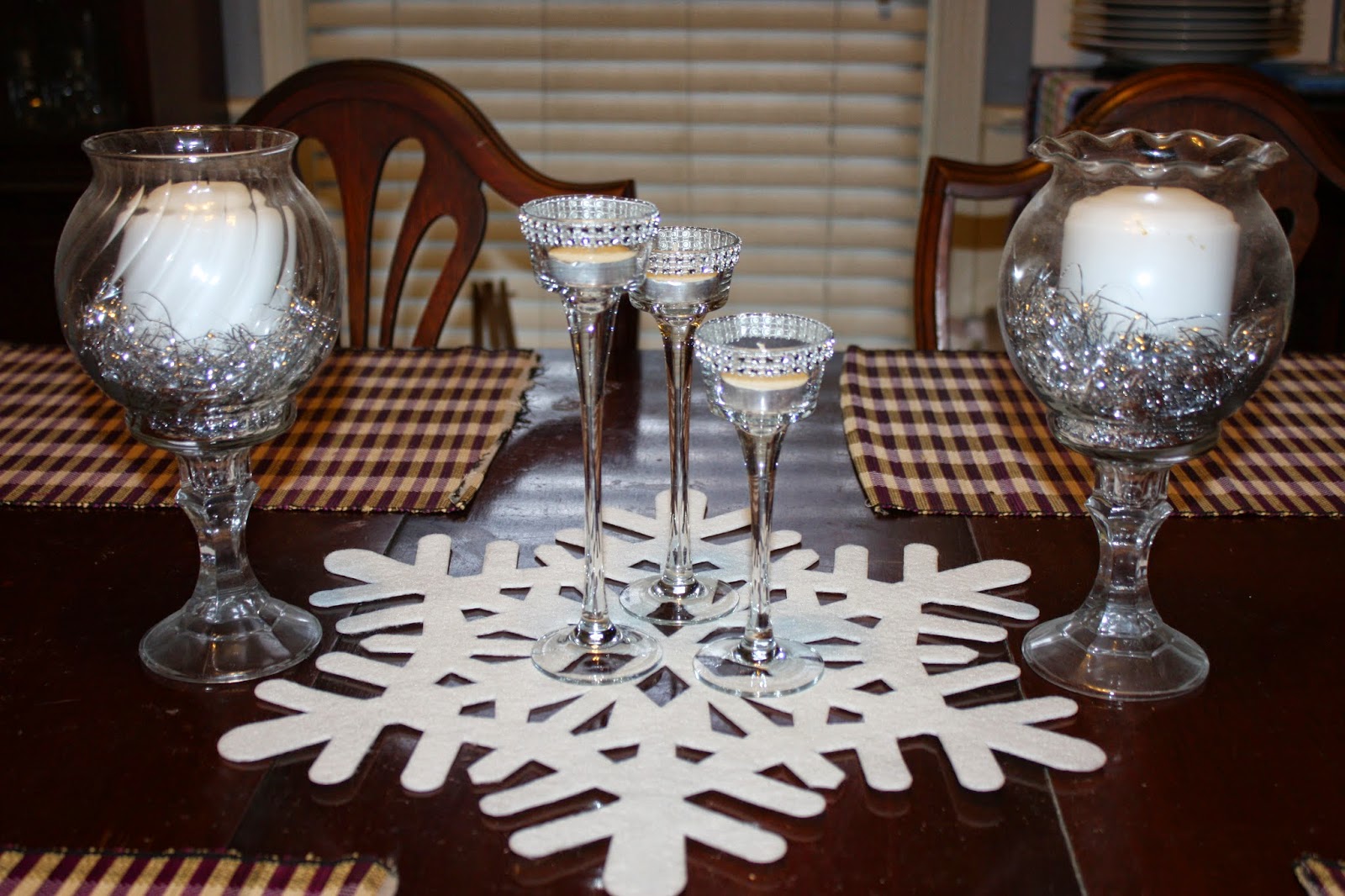 For several years, I have been wanting to try essential oils for various things ~ health reasons, for natural cleaners, and because most of them smell amazing!

There are so many different avenues of education out there about this subject.  I do know enough to realize that they have to be 100% pure and therapeutic grade, if you are going to ingest them.

I have found several recipes (on Pinterest) on how to make your own oils to use in cleaners.  Which would be budget friendly.

Right now I am looking at the benefits of lavender, lemon, orange, frankincense, peppermint, and grapefruit.  There are probably a couple of more that I have forgotten.

Amazon Prime has some great books you can check out for free (well, the service is $10 a month, so its not totally free).

Here are some cool charts I found on pinterest explaining different things ~~~~~ (I have no idea where or who I am going to get these from ~ some of these link to different companies, none of which I am endorsing at this time.)  I am thankful for the huge amount of information to be found so easily! I had the test done on Tuesday.  I was a good girl and followed all the directions ~ telling someone with vertigo to NOT take their medication for 48 hours preceding the test was just a bit cruel....just saying.

I read up on the test on Web MD ~ and thought, this shouldn't be too bad.  Usually Web MD gives you intimate details you wish you didn't know.  The person who wrote the report, never had any experience with this test.

Lets just say ~ I found a new torture.  To purposefully make someone dizzy, really dizzy is just plain rude.  I felt like I was falling and I was laying down ~ very weird.  Then there was the part where the goggles you have to wear are closed, and you have to keep your eyes open ~ I never knew that darkness could spin, it does! (Remember on the old cartoons when someone got conked on their head and their eyes would spin?  That's what it felt like.)

You have to keep your eyes open because one side of the goggles is a camera.  This camera tracks your eye movements while the torture test is going on.

I sincerely hope this "fun" is never repeated.  I should find out the results sometime today.

The results of the test are still lingering because now I have an ear ache ~ yes Mom, I called the dr.  Had to leave a message.

But, progress has been made ~ I am less dizzy than 2 /2 weeks ago.  Its more of an unsteady feeling.  Walls are still my friends.

I am putting this in the Thankfulness category because I am thankful this test is over with.

31 years ago, I started on a fantastic journey ~ at 8:54pm my first child was born ~ James Steven!  Its been exciting, nerve wracking, hyper, prayer filled, loving, adventurous, never dull & AWESOME!

Happy Birthday to our sweet Jennifer, Allens wife, Aidens Mommy.  You, bonus daughter, have brought much joy to my Allen and are a fantastic mommy!  Wish we lived closer to celebrate together!

Some things I've learned in the last 2 weeks ~

sitting while the rest of the choir stands is ok

not a good idea to swirl paint on the inside of a ceramic piece and then dump it out ~~~ landed in my lap!

walking close to the wall, chairs, etc. is helpful

holding onto a shopping cart is somewhat dizzying

riding in a wheelchair is even worse (tried that at Belks)

I haven't driven in 2 weeks but I don't anticipate that driving would be a good thing.

Having a well stocked freezer and pantry &/or children/husband that can run errands is a huge blessing.

I have been to the dr., they are doing additional testing tomorrow.  Hopefully, we can find out what is going on, what caused this, and take care of it. Last Tuesday, I was just going along ~ minding my own business ~ working at the shop ~

This wasn't "oh, I am a little dizzy", this was "I sat down and was afraid to get up dizzy".  Greg came and got me and we went to dr. ~  he doesn't know what happened.  I had an MRI to rule out any really bad stuff like a stroke or tumors ~ no bad stuff and it did show I had a brain!  Yay!  And speaking of MRI ~ seems like they could make that machine much quieter, even with ear plugs it is loud and confining ~ I closed my eyes and sang (in my head) the words to my favorite 2 songs in our churchs Christmas musical, Hallelujah and O Holy Night, over and over.

And 6 days later ~ it is still here.  I have an ppt. at a clinic but the earliest time was next week ~ argh....another week.  And then  realized, what if this doesn't work ~ what if you need more than one appt. ~ it was already disconcerting to realize the dr. gave me a prescription for the med. and gave me an automatic refill on it.

If anyone knows of any quick cures let me know ~ I may take any quack cure tips too!

And yet, there are things to be thankful for ~

*that this did not happen at Disney World
*that this did not happen 1 week earlier when we were with our babies
*that I can still sit and cross stitch
*that I have a great family to help
*that I can read
*that there is no pain
*that Amy & Will can both drive ~ get themselves back and forth to work and run errands
*that Greg could leave and rescue me
*that there is medication, even if it makes me sleepy

When James was 2 or 3 years old, Blackie the stick horse came into our lives ~ gift from Granny & Grandaddy Bill.  James is now 30 ~ 31 in 2 weeks, Blackie has been ridden by many children over the years.  This past weekend, my grandson Robert, age 2 1/2, discovered Blackie.  For a 28-29 year old horse, he is remarkably fit! 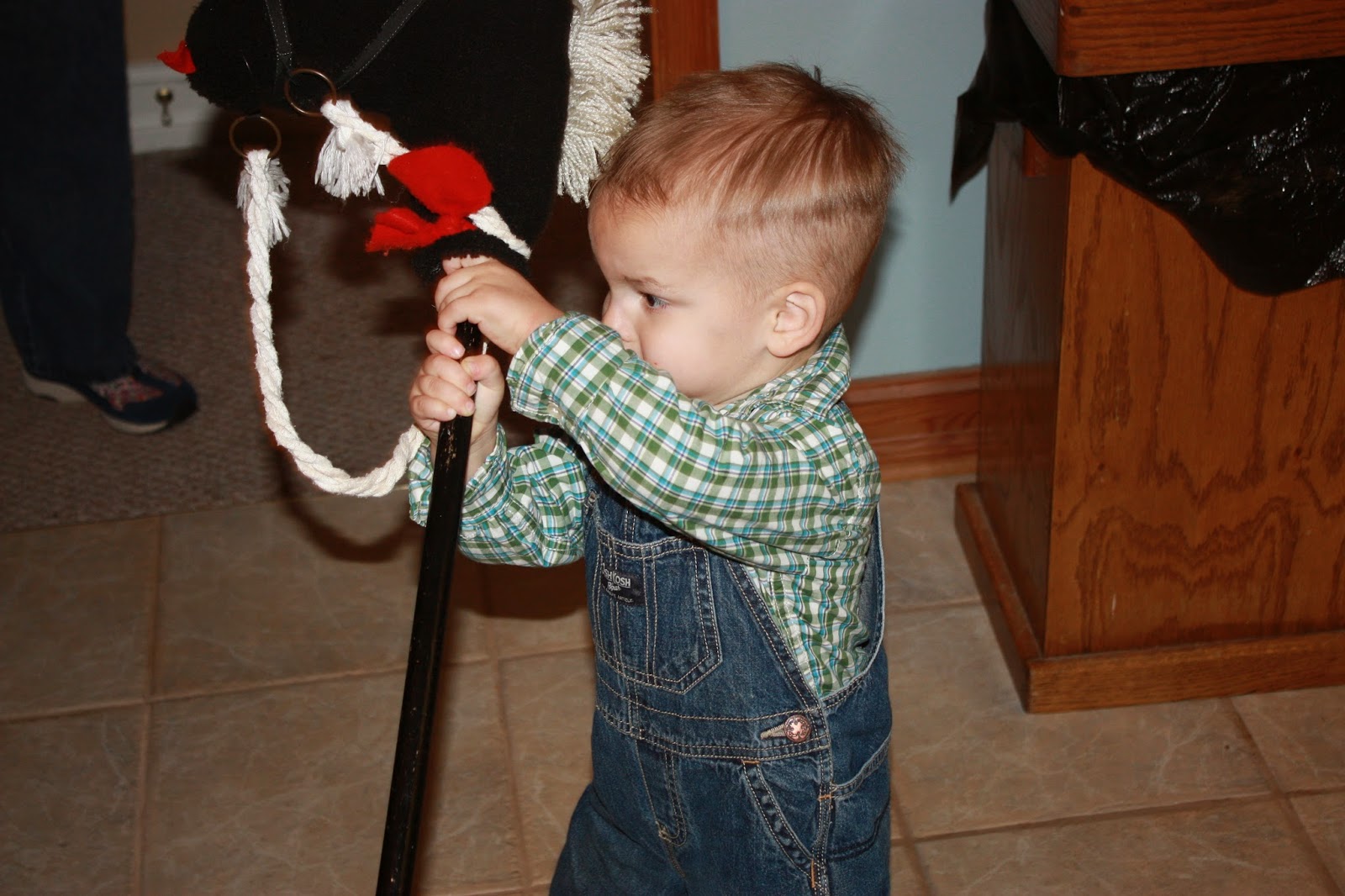 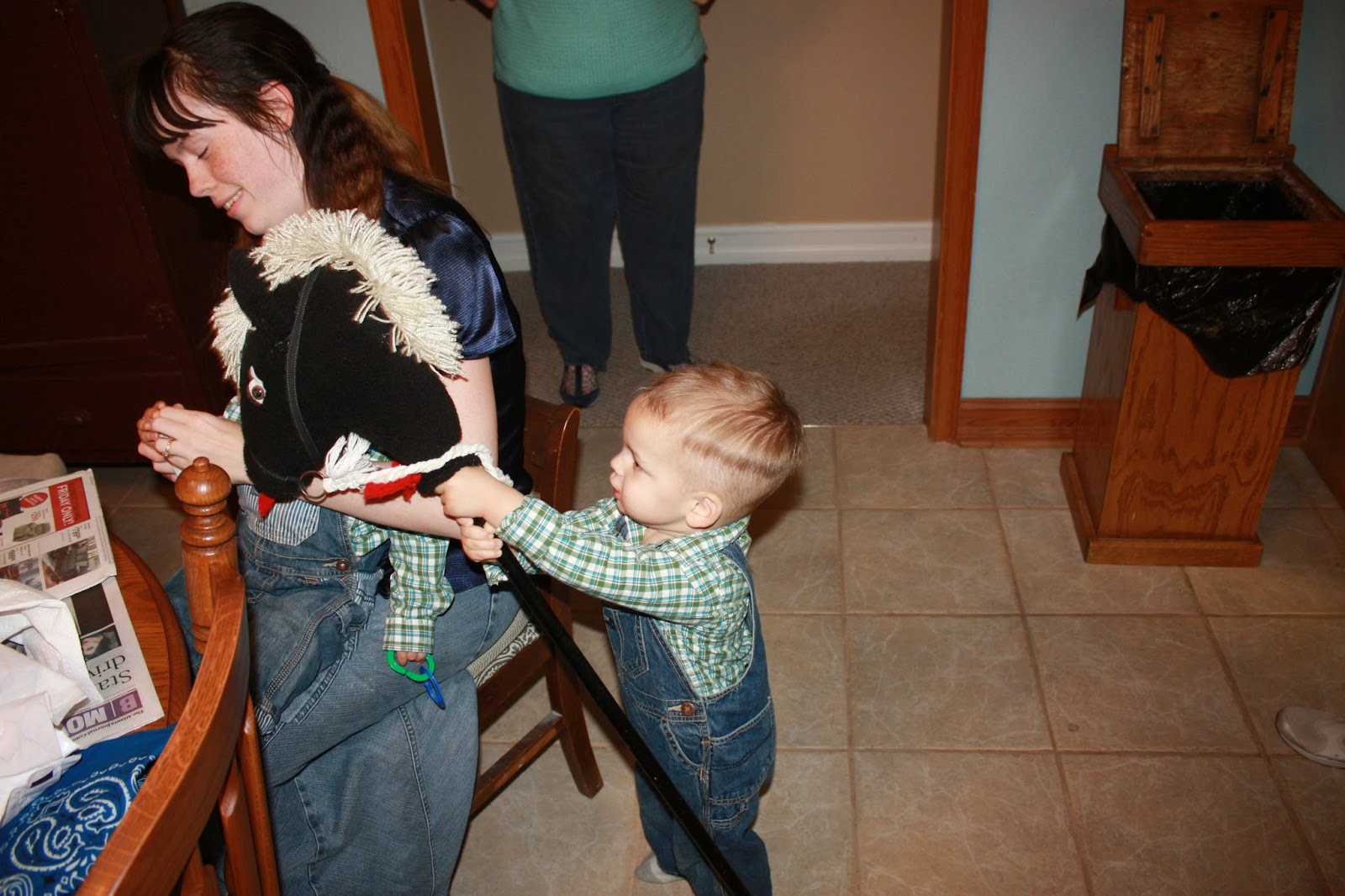 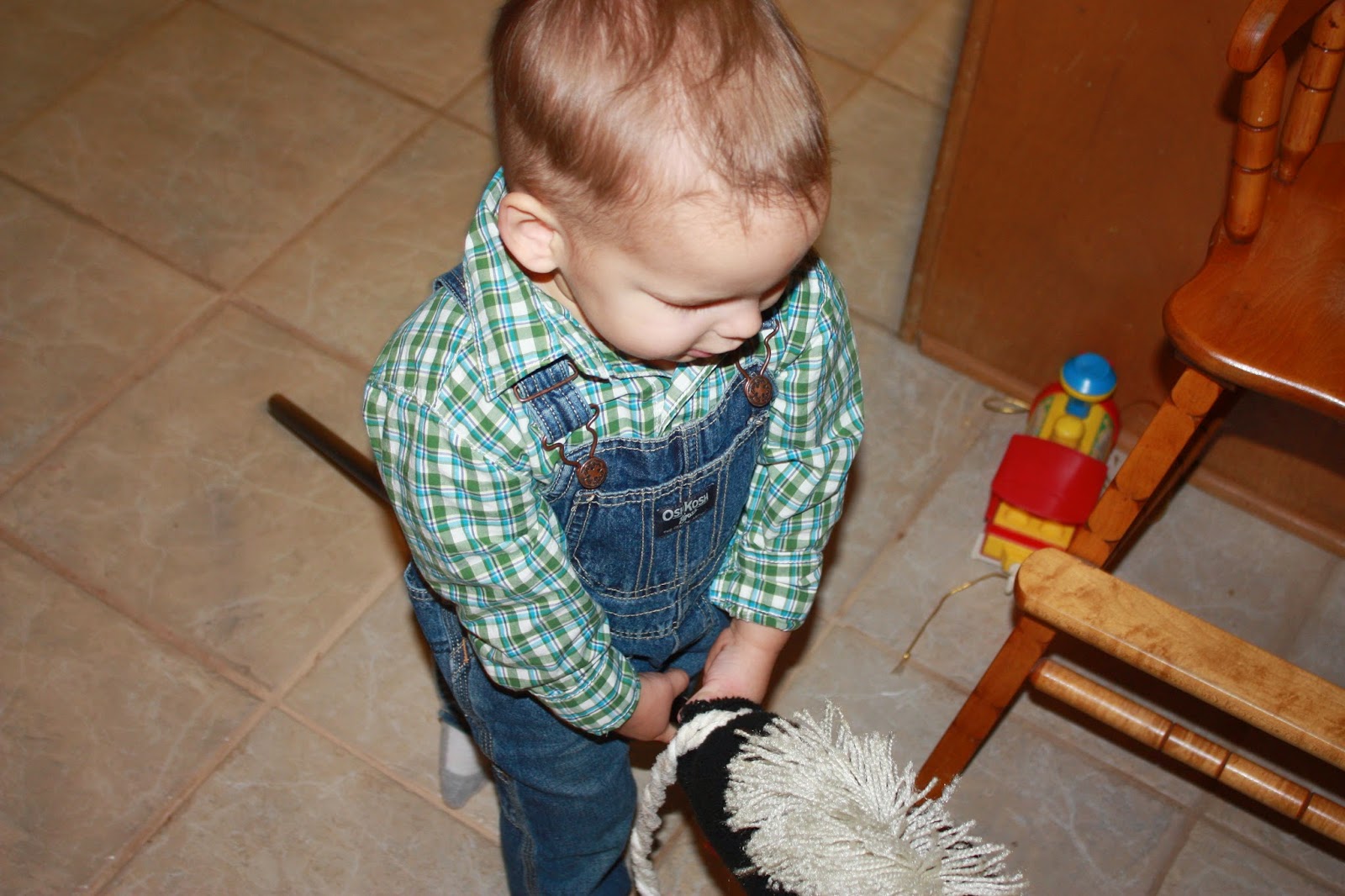 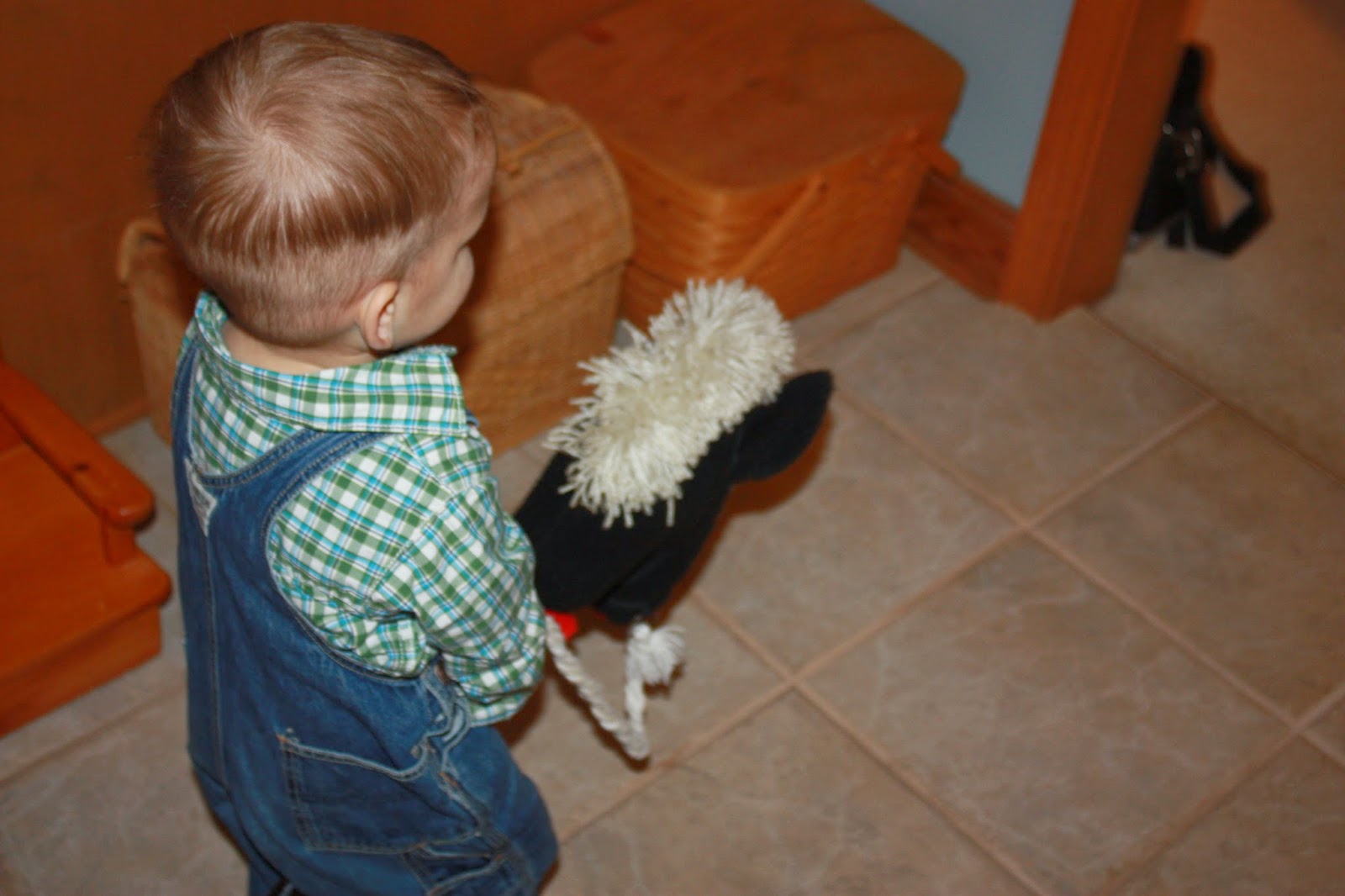 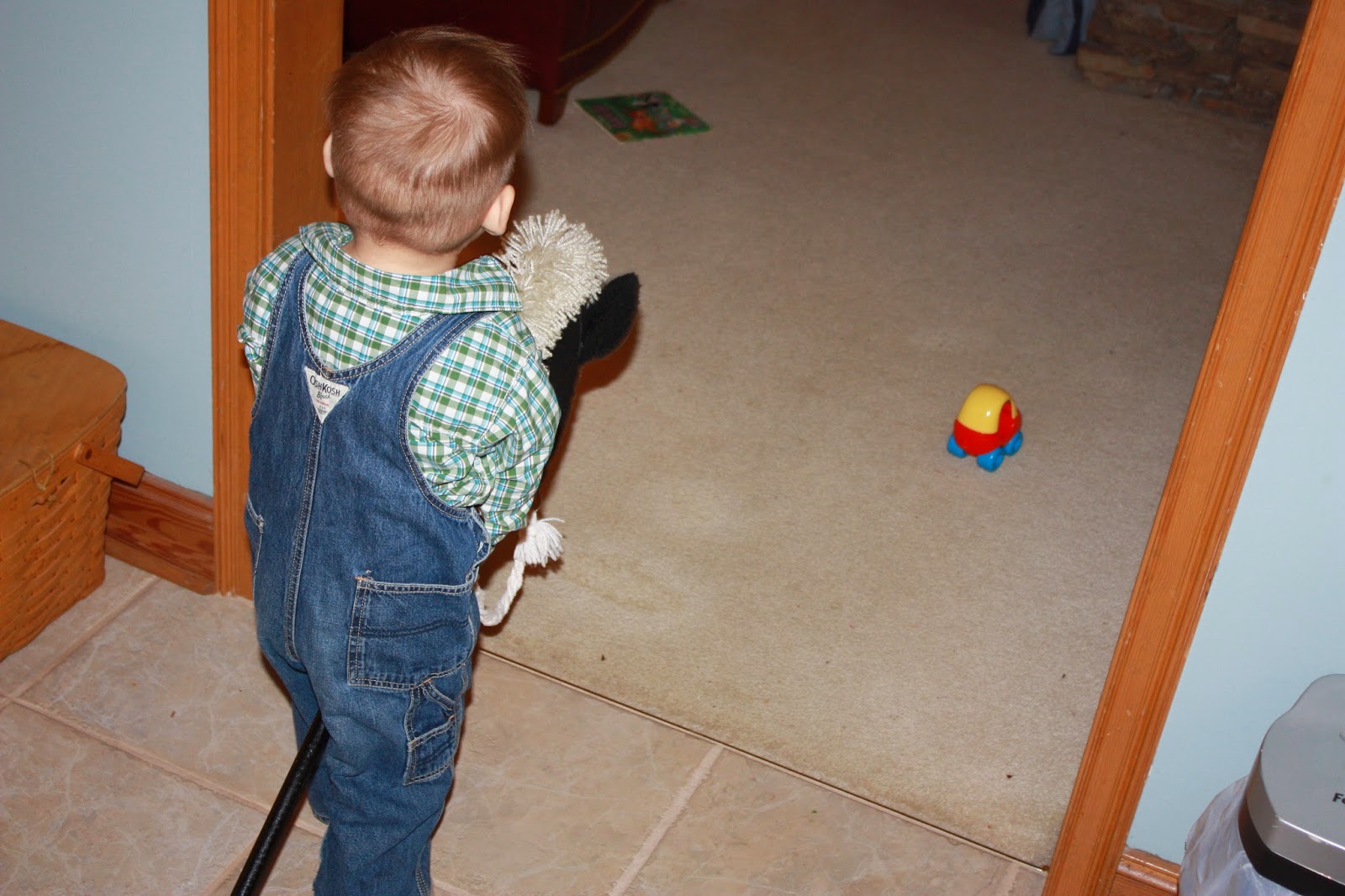 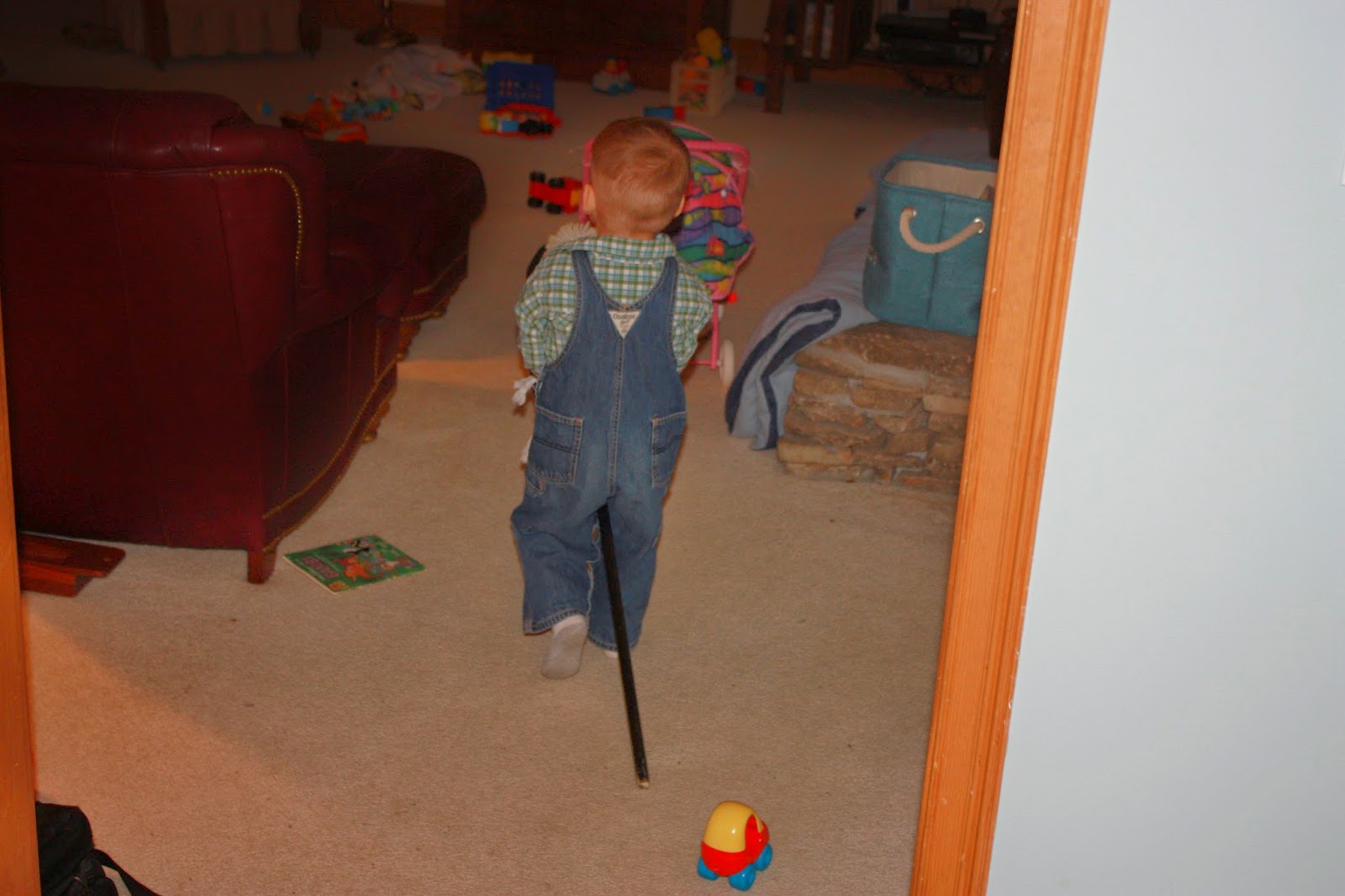 We were so excited to volunteer at the Operation Christmas Child center in Atlanta on Saturday night!  For many years, we have packed boxes and worked at our local relay center, but this is shoeboxes on steroids!

I did the pre-inspection and the inspection parts of the process.  In the pre inspection, you open the crates full of boxes from the relay centers ~ look in each shoebox for the donation envelope for shipping and put it in the lockbox (on each table) ~ then pass the box to the inspectors.  The inspector empties the box and takes out any items that shouldn't be in there ~ repacks the box and adds filler items if needed.  If your box comes to the center 1/2 full, it leaves completely full.

Un wanted items were in many boxes ~ over 1/2 that were inspected.  No liquids means ~ no bottles of glue, no shampoo, no conditioner, no lotion, no hand sanitizer, it means no liquids.  No food means ~ no packages of cookies or crackers or any food. No war toys ~ no army men, no cap guns, no ninjas, etc.

We had the privilege of hearing from a young lady who was volunteering, and as a child she was a shoebox recipient in Honduras.  This young lady talked about being given her box, as a 5 or 6 year old in the orphanage where she lived.  It was the first gift she had ever received and the first personal possession she owned.  She was thrilled to find a toothbrush in her box because in the orphanage she shares a toothbrush with 25 other girls.  She was excited about pencils in her box ~ at the beginning of the schoolyear, each child was given a pencil and a notebook and they had to last all year ~ if not, they were punished.  She was so excited about her box, that she slept with it every night and when she was at school, she hid it in the ceiling of her room so that no one else could get it.  At the age of 13 or 14, she took her box and went off by herself really angry and questioning the Lord as to why she was in an orphanage and why her siblings were all adopted ~ she opened her box and the Lord spoke to her heart through the little note the giver had put in the box with the goodies ~ "I love you and God loves you."  Soon after, she was adopted by an American family and brought to the USA.  She was able to finish highschool and attend college.  While in college, she played soccer and has been able to take her soccer team to Honduras on Mission Trips.  And volunteer at Operation Christmas Child.

So each box is more than a "simple gift", its a reminder to children in very difficult situations and conditions that someone loves them and was thinking of them.  Its a way to show the Lords love.  It can be a way the Lord draws these precious little ones to Him.

What did I learn through this experience ~ my shoeboxes will have packages of pencils, not just a couple ~ notebooks and school supplies are needed and wanted ~ I should start putting personal notes in the boxes ~ continue to pray for the children that receive the boxes, for years.

And Greg's reaction, as this was the first time he had been involved with this ~ "we need to make this an annual tradition"!

If you would like any additional information on how to be involved in this awesome ministry, please leave me a note or go to "Operation Christmas Child" and read about the ministry an how you can help.  Its too late to pack a box this year ~ but you've got 12 months to collect goodies for boxes for next year.

The boxes from Saturday were going to the Central African Republic.

We love using essential oils! To see how they could enhance your life ~ please visit my online store ~ http://mydoterra.com/jacksonsessentialoils